As expected, in “Solid Blue” New York State, the 2020 presidential election was no contest. Joe Biden beat Donald Trump by just under 2 million votes. But in Orange County in the Hudson Valley, as in many other counties further upstate, the majority went for Trump. 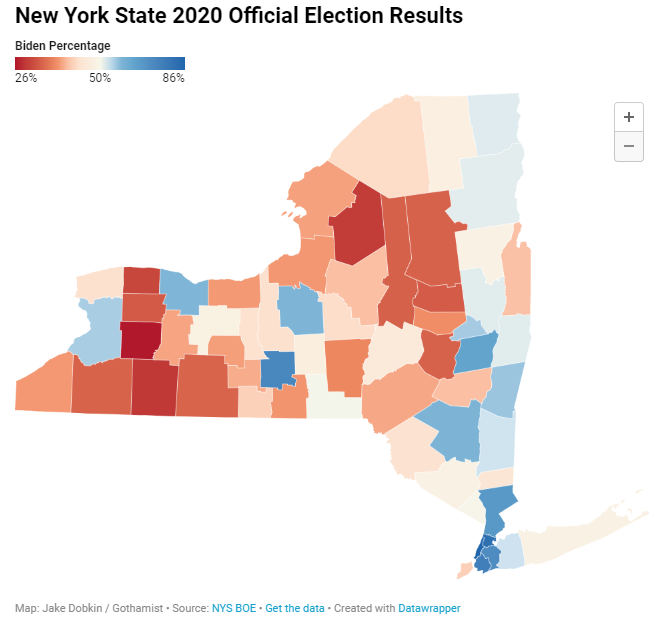 Hold on to your hat. In the context of likely continued deep national party divisions, this suggests that we can expect trench warfare to be the future county political norm. 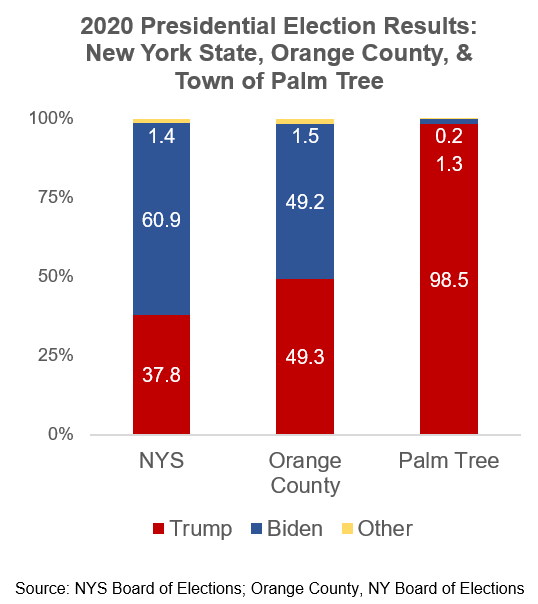 It is not just the result and the closeness of this year’s presidential vote, but its composition, that is an important harbinger of the current and future shape of Orange County politics. One key fact: the incumbent president got 6,277 votes (98.5%) to Biden’s 85 (1.3%) in the newly created Chasidic Town of Palm Tree. There the landslide was Trump’s.

Then consider this: about one-third of Palm Tree voters (35%) were enrolled as Democrats at the beginning of 2019, and nearly four in ten (39%) as Republicans. If most voters in Palm Tree had simply voted in accord with their enrollment, as do most voters elsewhere, Biden would have carried the county. But they did not, and he did not.

There are credible ideological and policy reasons for Chassidic voters to favor Donald Trump at the polls. They are attracted by his advocacy of conservative interpretations of First Amendment protections of religious liberty. They are social conservatives, against abortion, against gay marriage. They supported the former Trump administration’s close relationship with the state of Israel, and U.S. recognition of Jerusalem as Israel’s capital.

But it’s not just ideological affinity or shared policy positions that produced near unanimity for Donald Trump in the Town of Palm Tree. On the same day, on the same ballot, the town’s voters delivered 83 percent of its vote for member of congress to four-term incumbent, Democrat Sean Maloney in his race against Trump-backed Republican Chele Farley. Maloney, a centrist Democrat, is a supporter of Israel, but differs with Chassidic voters in several areas of high salience to them. Two examples: Maloney is gay and an ardent advocate of gay rights. He is strongly Pro-choice. 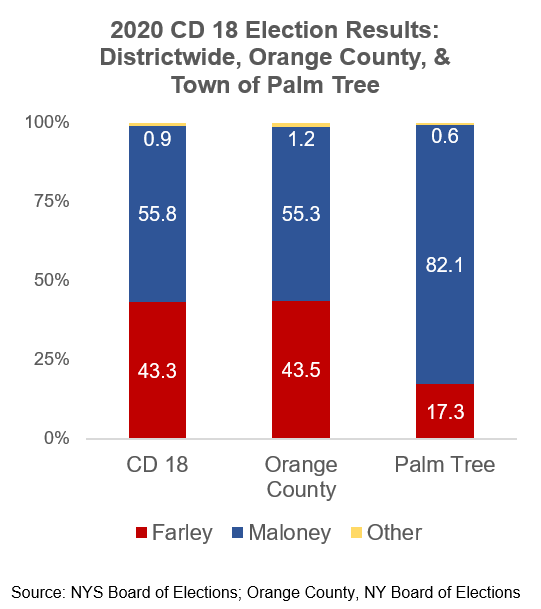 But Maloney is also an incumbent, and one with growing stature in Congress’s House majority. He was just selected by his colleagues to lead the DCCC (Democratic Congressional Campaign Committee) in its effort to retain the majority in 2022, after a disappointing loss of seats this year and in the face of Republican gerrymanders by the majority of state legislatures they dominate across the country. In short, he’s an increasingly good friend to have.

In fact, it is reasonable to argue that Maloney holds his seat in Congress because of prior Chassidic support. The Town of Palm Tree was created in 2019; there is no election data for it on file for earlier years. But there is data for election districts in the Chassidic Village of Kiryas Joel. It shows that Chassidic voters there backed incumbent conservative Republican Congress member Nan Hayworth with 58.7 percent of their vote in her race against Maloney in 2012, only to see her narrowly beaten. In the rematch between the two in 2014, Kiryas Joel voters gave Maloney nearly two-thirds (65%) of their votes, and actually provided his margin of victory. They’ve been in his corner ever since.

For Americans generally, voting is an expression of individual preference. For the Chassidic community, in contrast, votes are a communal resource, with individuals “contributing” them to a candidate or party at the direction of community religious leaders. Other aspects of community members’ political involvement is also tactical, and managed: party enrollment and the use of third- party lines to demonstrate voting strength are two examples.

Chassidic community leaders negotiate with candidates on the proportion of the community’s votes they will receive. The vote is reliably deliverable and, as again evident this year, demonstrably transferable within and across election years from one party or candidate to another. The process is transactional; political support is provided with the expectation of assistance in achieving future community goals. Failure to meet expectations may result in denial of future support at the polls.

The current strength of the Chassidic vote in Orange County is understated in this brief report. It’s difficult to estimate accurately from aggregate statistics; not all Chassidic voters live in communities or election districts that are entirely Chassidic. And because of its high birth rate the communities’ strength will only grow.

Chassidic leaders argue that criticism of their communities’ political practices is still another manifestation of widespread, insufficiently acknowledged antisemitism in our region. They are right when they point out that there is nothing illegal about bloc voting. They are accurate when they remind others that bloc voting is a hoary practice in the political history of the United States, famously employed by urban political machines.

But others see that in communities where both Chassidic and non-Chassidic people live, the East Ramapo School District, for example, leaders elected with Chassidic backing devote few resources and give little consideration to the needs of those outside their community. In East Ramapo, for instance, the Second Circuit of the United States Court of Appeals just found that the school district tried “to hide the true nature of minority voters’ exclusion from the political process…” in an effort to dilute “black and Latino residents’ votes in violation of Section 2 of the Voting Rights Act.” And in Orange and the region’s increasingly competitive jurisdictions, they see elected leaders concerned about the bloc vote reluctant to enforce the same expectations for conformance with the law on Chassidic community members as upon others.

That’s concerning, for example, in the area’s compliance with public health or private school standards.

Orange County has a pending study on approaches to relieving the tensions that have repeatedly  arisen between its Chassidic residents and others. This is a needed step. But whatever steps are taken, it is hard to imagine that they will affect – or alter – the fundamental political realities again revealed in this year’s elections.