By Josh Simons with kt Tobin

The past two posts in this series have described the uptick in the trend of people moving to the Hudson Valley en masse from New York City in the wake of the COVID pandemic as well as predictions about the scale of this phenomenon (big!), and including the forecast that the most transformative change in the Hudson Valley will be seen in the City of Poughkeepsie.

Looking back at how the city got to where it is today, Poughkeepsie has failed to realize the vision of its 1998 comprehensive plan and now 22 years later it remains dated and unchanged. Further, we covered the damaging effects of Poughkeepsie’s use of an antiquated and inequitable delinquent taxes collection method and how that practice has contributed to its failure to address its problem with vacant and abandoned properties. Still, despite these previous criticisms, the crisis of the global pandemic now presents opportunities for Poughkeepsie.

It is important to first elaborate on what is meant by “transformative change.” It does not mean that Poughkeepsie is going to have the most people move to it (though it may), and it is not necessarily the case that there will be a massive amount of new construction (in the short term anyway) that would change the layout of the city. What I do mean is that Poughkeepsie is going to undergo rapid change in the same way that the cities of Hudson and Beacon have already. There are several indicators that a mix of younger professionals and younger families will move to Poughkeepsie from New York City looking for a mix of rural and urban amenities, walkable neighborhoods, and access to the natural environment. With this influx of people/customers/clients, businesses in the city, especially those based on hospitality, will flourish.

This may seem like a bold prediction, but the data we have gathered indicates that the same kind of real estate boom that Kingston is now experiencing is similarly going on in the City of Poughkeepsie. Using publicly available data from zillow.com on recent residential sales, here is a brief comparison of the two housing markets. The results are surprising.

The Data After retrieving six months (May-October 2020) of data for all residential sales in the city limits of both Kingston and Poughkeepsie, the information was cleaned and verified to make ready for analysis Zillow’s stats on sale price, date sold, square feet, bedrooms, and bathrooms. Properties transferred as the result of tax foreclosure or tax lien sale were eliminated from the dataset. The first unexpected data point was that in that six month period, 29 more homes were sold in Poughkeepsie (157) than in Kingston (128). That said, perhaps the difference in volume could be explained by the scale of the cities. But when normalized by sales per 1,000 residents, the volume of sales is roughly the same; Poughkeepsie (5.15), Kingston (5.57). Still, given all the buzz about Kingston and crickets about Poughkeepsie, this news is surprising.

Sources: for population, US Census American Community Survey; all else, Zillow.com and Benjamin Center

Though the volume of sales is negligibly higher in Kingston it is remarkable that residential properties in Poughkeepsie have sold at such a similar rate. The Kingston market hasn’t cooled off. The Poughkeepsie market has heated up.

Before the global pandemic struck, Kingston was already a very hot housing market. The latest wave of migration from New York City has further tightened that market. It is striking that the housing market in Poughkeepsie appears to be as hot, if not hotter than sales in Kingston over the past half year or so. One of the reasons for this could be that in Poughkeepsie there are better deals to be found. But what makes for a better deal in the eyes of a NYC buyer?

Convenience One reason why Poughkeepsie is attractive to those moving up from New York City is its position as the last stop on Metro North. You can take Amtrak to Hudson and beyond, but the per-ride cost is considerably higher. You can take the Trailways bus to and from Kingston, but that lands you at the Port Authority once you’re in New York City, which isn’t nearly as reliable as heading into Grand Central Terminal as buses confront traffic and the train runs on schedule much more dependably. The MTA makes commuting into Manhattan relatively easy, and though right now a great many white collar jobs are being performed remotely, for some the need exists now or will soon in the future, post-pandemic, to occasionally be physically on site. For other would-be Poughkeepsie buyers, having easy access to the train to commute to the city is a good way to hedge their bets in terms of if and when they need to stop working from home.

Public Policies Over the past five years Mayor Rolison and the Common Council have worked to turn around the city’s budget and service delivery. The fiscal deficit has been cut in half (though the tax revenue shortfalls brought on by the pandemic are sure to be challenging); political leaders have put a distinct focus on better sanitation and cleaner streets, public safety, and the rezoning of the central business district. In collaboration with Dutchess County, the city has created a land bank to help remedy the issue of vacant and abandoned properties. Civic and community leaders have also made progress on remediating the old YMCA site in order to create a youth center. Recently there has even been a Children’s Cabinet formed to bring together the school district, government agencies, child-serving community organizations and other local stakeholders to improve their ability to collaborate and coordinate youth support and services.

Recent Development Over the past few years, and partially in anticipation of the 2022 opening of the Marist Health Quest Medical School at the Vassar Brothers Medical Center, developers have been investing in constructing several luxury and market rate housing projects.

But for Whom In The State of Equity in American Public Administration, George Frederickson urged public administrators to ask the most important question: “for whom is this program effective or good?” The current and future wave of migration from New York City to the Hudson Valley is not a municipal program or policy, but local government’s coordinated response (or lack thereof) is, and the type of actions and interventions will have significant impacts. These new migrants to our region bring with them a new perspective, formed by life in the largest cities in the United States. And importantly, they also bring their money with them.

This is going to increase property values, and as a result, the overall dollar amount of the tax base will grow, meaning that there will be more to draw from to help stay under tax caps. Growth in the property tax base reduces the rate needed to bring in the same revenue, which generally is good for school districts as well as local governments that rely on the property tax. It will also be good for the local amenities economy that includes restaurants, bars, arts and music venues, etc., especially so once the pandemic is over. It is also likely to be very good for the many who currently own property in the Hudson Valley, especially those that own in the small cities and villages where the draw from NYC is the greatest. Higher property values means that there is more equity in these homes, and all-time low interest rates means that refinancing options can lessen the cost of ownership for these properties.

But there’s still Fredrickson’s lingering question. Or, rather, the inverse: Who will this be bad for?

For the many living in our region who were already struggling pre-COVID to get by, rapidly increasing housing costs are going to exacerbate those conditions. For households already stretched to keep their homes due to high property taxes, increased property values that result in higher assessments with larger tax bills may push households out of their homes/homeownership. And as property values soar, home ownership will become more unattainable for households at the bottom of the socioeconomic hierarchy. Compounding this issue is that higher home prices also mean higher rents. This means that regardless of where a person falls on the economic spectrum that housing costs will increase. Households already on the edge of making ends meet are much less able to absorb these increases.

In 2019, 35 percent of the non-vacant housing units in the City of Poughkeepsie were occupied by homeowners, and a majority (65 percent) were occupied by rent-paying tenants. A conventional metric to determine household affordability is that housing costs should not exceed 30 percent of income. That same year, 43 percent of homeowners needed to allocate 30 percent or more of monthly income to pay their mortgages and the numbers are worse for tenants. A majority, 59 percent, were utilizing more than 30 percent of income to pay the rent, including nearly four in ten (37%) of renters who needed 50 percent of more of monthly income to keep a roof over their heads. Without some kind of policy intervention to make these alarming percentages go down rather than up, many of these people are no longer going to be able to afford to live in Poughkeepsie, and will be displaced. 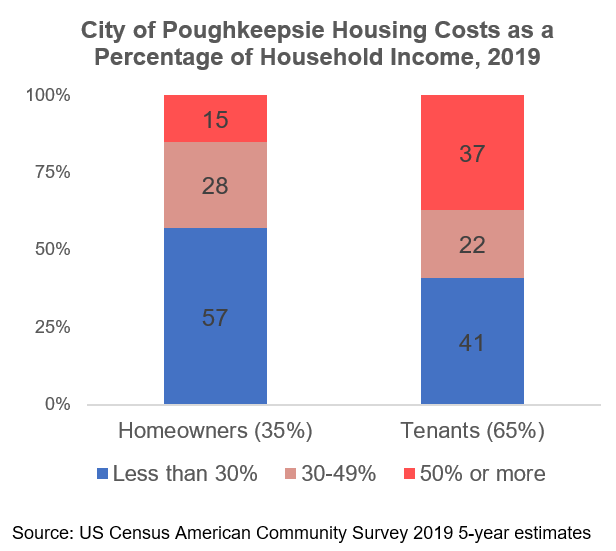 While the current wave of migration from NYC is going to be the push that gets Poughkeepsie’s revitalization efforts over the hump, gentrification is the other side of the revitalization coin. Without concrete policy that leads to action, a great number of people across our region are going to be displaced and unable to afford to live in their homes and neighborhoods anymore. Realistically, it is no longer possible to avoid the gentrification of the Hudson Valley entirely, but with focused planning and policy interventions, elected leaders and those who have the power to affect change need to act very soon to lessen the severity of the blow.

As a former resident of Poughkeepsie, and a retired faculty member, who was always disappointed with the city’s revitalization, it was a pleasure reading your article on the city’s potential opportunities.

As expected, in “Solid Blue” New York State, the 2020 presidential election was no contest. Joe Biden beat Donald Trump by just under 2 million votes. But in Orange County in the Hudson Valley, as Read more…